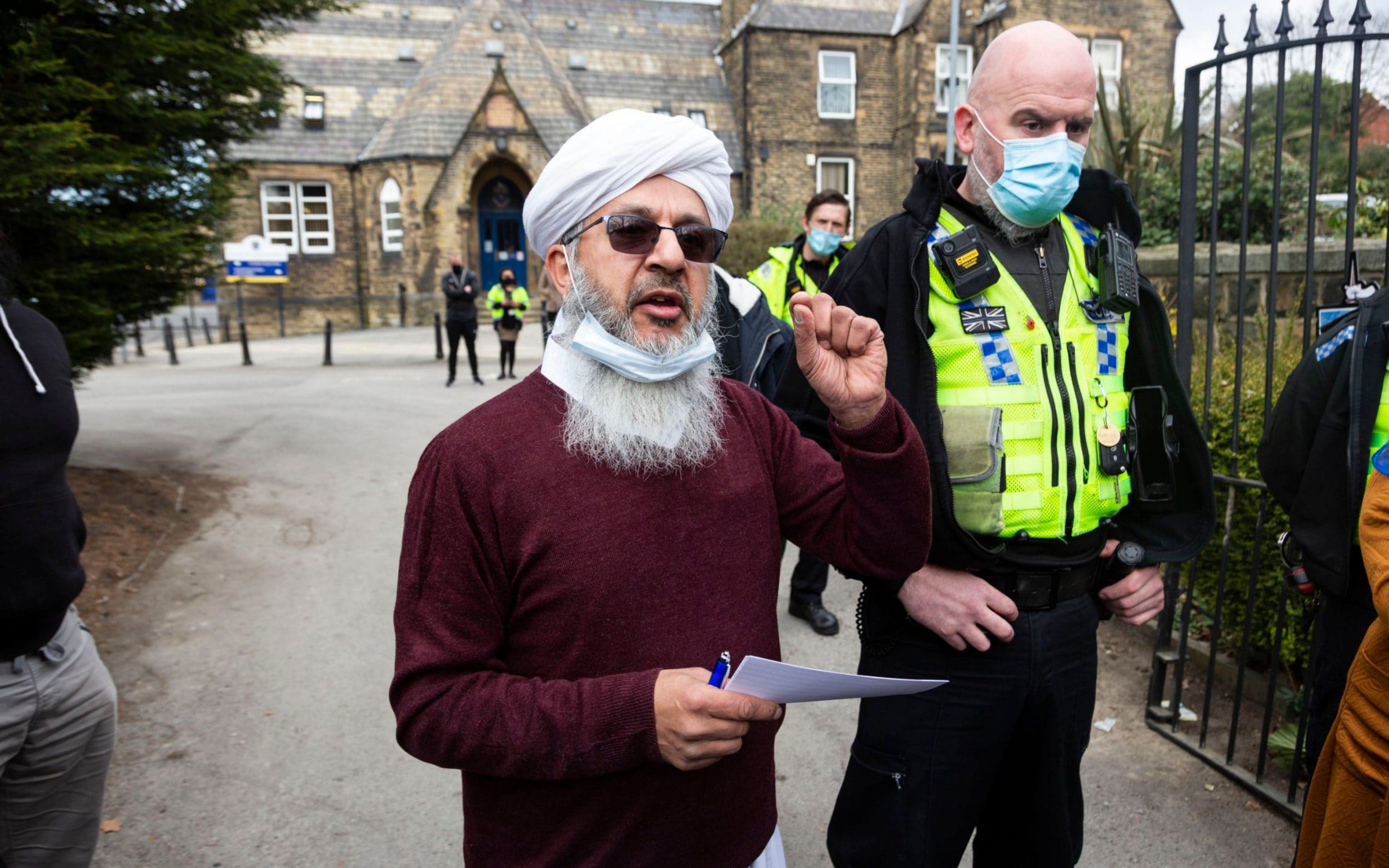 A teacher has been suspended for showing his class a cartoon of the Prophet Mohammed after dozens of protesters gathered at his school gates this morning.

Batley Grammar School in West Yorkshire was forced to delay its opening, telling students to stay at home while police officers stood guard at the gates.

Gary Kibble, the headmaster, wrote to parents to offer his “sincere and full apology”, adding that the picture shown in a Religious Studies (RS) lesson on Monday was “completely inappropriate”.

He said that the image “had the capacity to cause great offence” to members of the school community, adding that the school launched an investigation following concerns from parents.

But his letter did not deter over a hundred protesters from arriving at the school this morning, after messages were circulated on social media last night urging members of the local community to turn up in person.

On Thursday morning the road which the school is on was closed off by police, who erected a cordon stretching around 300ft.

“What happened here, we are disgusted,” the Imam said. “What has happened is totally unacceptable and we have made sure they are aware.

“The teacher has been suspended. They can’t just sack him, they need to do their due process.

On Wednesday evening messages were circulated on social media encouraging people to protest at the school.

“It is imperative that all of us turn up to demand the resignation of this teacher as an absolute minimum and fulfil our duty of defending the honour of RasoolAllah,” one message on Facebook said.

The message, which purported to name the teacher in question, urged people to come and “defend the honour of our prophet Muhammad”.

Mr Kibble had attempted to diffuse the situation by sending a letter to parents earlier this week.

“The school would like to thank the parents who contacted us on Monday, March 22 highlighting concerns with a resource used in an RS  lesson that day,” he said.

“Upon investigation, it was clear that the resource used in the lesson was completely inappropriate and had the capacity to cause great offence to members of our school community for which we would like to offer a sincere and full apology.”

He went on to explain that the school had taken “immediate action” following its investigation, including the removal of the resource from materials and the suspension of that lesson content from the scheme of work.

“As an additional precaution, we will undertake a formal review of the RS curriculum to ensure no other resource or statement is inappropriate and take appropriate action as needed,” he said.

Parents were sent a text message this morning asking children to stay at home “due to the disturbance outside of school”.

They were told “if your child has not already set off please keep them at home as school will be starting at 10am”.

Its alumni include the eighteenth century natural Joseph Priestley who is credited with the discovery of oxygen and is regarded as one of the founding fathers of Chemistry, among its alumni.

Another Old Batelian, as former pupils are known, is Sir Willans Richardson, who won the Nobel prize for Physics in 1928 for his work on thermionic emission.

Originally an academically selective school, Batley Grammar went on to become a fee-paying institution in 1978 and since 2011 has been a free school. It is now part of Batley Multi Academy Trust, a group of five state schools in the local area.