Captain Sir Tom Moore has been hospitalised with Covid-19 following a bout of pneumonia, and the news hit me like a gut punch. Given the great man’s age, 100, and the fact he also has pneumonia, it’s obviously a very serious situation.

How cruelly ironic that this national hero is now battling the virus that he’s done so much to help combat with his £39 million fundraising efforts for the NHS.

I immediately texted Tom’s daughter, Hannah. ‘Please tell your dad we’re all rooting for him.’ 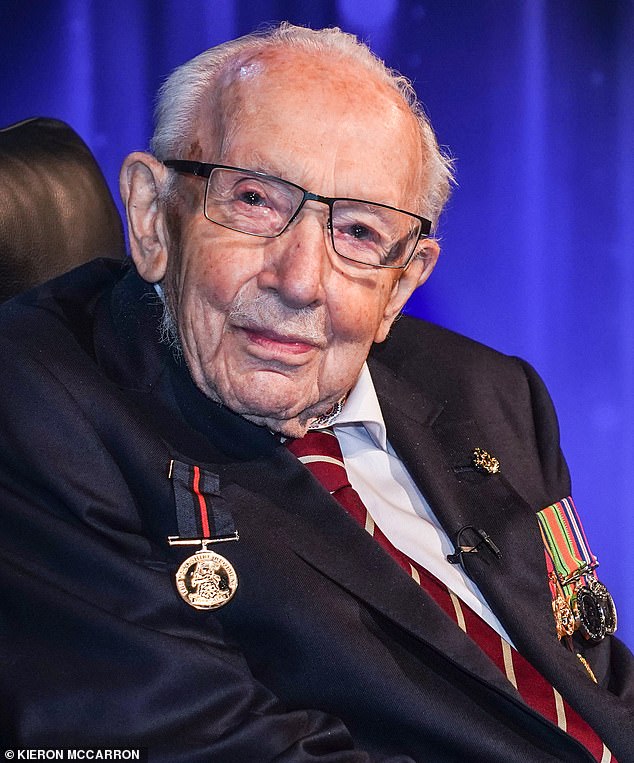 When I interviewed him for Life Stories last September, Sir Captain Tom Moore (above) sat down in the chair before we started and slowly shook his head

A few hours later, she replied: ‘I passed on your message and it made him smile. I’ll call you when things are more stable.’

It’s extraordinary to think that this time last year we’d never heard of Captain Tom Moore. In fact, it wasn’t until April 12, at the height of the first wave of the pandemic, that I first became aware of him when he tweeted me (with help from his grandson) to ask: ‘Can you walk 100 laps of your garden, Piers?’

I was bemused but soon discovered he was a 99-year-old war veteran trying to walk 100 laps of HIS garden before his 100th birthday to help the NHS who’d saved him after a bad fall.

He initially hoped to raise £1,000, but local media attention turned him into an internet sensation and money began pouring in.

‘Love what you’re doing, Tom,’ I tweeted back, ‘keep pounding!’

We booked him and Hannah on to Good Morning Britain the next day, and he explained his motivation: ‘When our nurses go in to work at the moment, they must feel like Daniel going into the lion’s den because they know they’re in for a pretty tough day, and by gum they’re brave. In the war, we had to carry on whatever was going on, but we knew eventually we were going to win and it’s the same with this virus. We shall get through it in the end.’

The interview struck a massive chord with the public and his JustGiving page surged past £500,000.

He called me, absolutely thrilled: ‘This is beyond anything I could have hoped!’

Two days later, he rocketed past that total too and we launched a GMB campaign to have him knighted. ‘That would be the greatest honour anyone could get,’ he said.

By the end of that astonishing week, Captain Tom had completed his 100 laps, raised more than £20 million, and galvanised the whole country with his mantra of ‘Tomorrow will be a good day.’

We stayed in regular contact and he would call me for random chats about his crazy new fame-fuelled life, and our shared loves of cricket and Yorkshire Gold tea.

Tom was duly knighted, won a Pride of Britain award, became a GQ Man of the Year cover star, and was promoted to honorary Colonel.

When I interviewed him for Life Stories last September – hilariously, his dressing room rider was ‘a can of coke, a bar of Dairy Milk chocolate and six blondes’ – Tom sat down in the chair before we started and slowly shook his head.

‘I can’t believe all this is happening to me, it’s quite marvellous at my age. I used to watch all those celebrities on your show and now I’m sitting here! It doesn’t feel right.’

I thought of all this tonight as he lies battling for life. In just nine months, this wondrously tenacious old man became a global superstar and reminded the world of those greatest of British values: courage, determination, resilience, humility and dogged optimism however grim the situation.

God, I hope he pulls through.

Hannah called this afternoon. ‘Piers, I’m so sorry to have to tell you that my father has sadly died.’

We had a very emotional conversation.

Tom went to live with Hannah and her family 14 years ago after his wife died, so they were incredibly close, and she was utterly heartbroken.

‘Your dad was a truly great man and I feel honoured to have known him,’ I said. ‘He lifted us all when we most needed it.’

‘He did,’ Hannah wept. ‘We will miss him so much. The house feels so empty without him.’

Shamefully, the family have been abused by vile social media trolls over a trip they made to Barbados – perfectly lawfully at the time – for a bucket-list family holiday in December.

‘The abuse has been so hurtful,’ Hannah admitted. ‘But we’ve had to endure it since my father first hit the headlines, with some people saying the most appalling things. I don’t understand why.’

No sane person could but sadly, Twitter is increasingly polluted by despicable, heartless morons.

‘Ignore them,’ I said. ‘They’re the worst of Britain, while your dad was the best. Did he have a good time?’

‘He loved it,’ Hannah replied. ‘He hadn’t worn a short-sleeved shirt and shorts for 30 years, but he did out there and sat in the shade reading books and having fun with his grandchildren. It was wonderful to see him so happy and relaxed after everything that’s happened.’

Hannah was crying again now, and I was choking up too.

If anyone deserved a break, it was Captain Tom. And I’m so glad he had it before it was too late.

The response to Captain Tom’s death has been astonishing, with tributes led by the Queen, the Prime Minister and even the White House. As a GMB viewer put it: ‘It’s like a piece of Britain’s heart just died.’

Tonight, I joined the 6pm ‘Clap-for-Tom’ with my nine-year-old daughter Elise, both of us applauding him as loudly as we could.

‘We are marvelling at the magical outpouring,’ Hannah texted me. ‘He would have been tickled pink!’

But he earned it.

Thanks for everything, Tom. RIP.