There is no evidence having schools open drives the spread of coronavirus in the wider community in the UK, SAGE scientists have found.

In a study of pupil and teacher absences caused by positive Covid tests, researchers said confirmed infections in schools did not lead to bigger outbreaks.

Instead, they said there were small signs that the opposite was true, and that schools tended to get worse hit when the cases around them had rocketed.

Schools are gearing up to bring their pupils back into classrooms within weeks, with Boris Johnson optimistic about beginning to the long route back to normality from March 8.

Many pupils have been home-schooling for almost all of the past year, except for a brief period between September and December before the second wave spiralled out of control.

But education bosses fear rushing back to normal classes could lead to an explosion in cases, leading to more closures and greater disruption. Neither pupils nor staff will have been routinely vaccinated against the virus.

Steve Chalke, the head of the Oasis Academies Trust, described Number 10’s plan as ‘impossible’ and suggested it was too optimistic to be promising normality in March.

Dr Mike Tildesley and Dr Ed Hill, SAGE members and Warwick University experts who did the study published today, said the reopening should be cautious and that it was important to ‘mitigate’ the inevitable risks of doing it.

The team admitted their paper was ‘an absence of evidence rather than evidence of absence’ of risk. And they conceded it probably underestimated how many Covid cases there actually are in schools because many people don’t get tested.

Schools in the UK have had to try and maintain social distancing between children but this is particularly difficult among the very young. On the other hand, missing school is particularly damaging for this age group as they are in key development stages (Pictured: Year 1 and 2 pupils eat lunch at a school in Greater Manchester last year)

The Warwick study found Covid cases among teachers fell during the November lockdown, even though schools remained open.

And in December, cases in schools appeared to rise in tandem with outbreaks in the community, with bigger outbreaks in London and the South East, where the new variant was surging, and fewer cases in more rural regions.

Evidence showed that the numbers of people taking time off appeared to track alongside general outbreaks in the area around the school.

But there was no sign cases in schools would predict an outbreak in the community. Instead, there was ‘weak’ evidence that the opposite was true, suggesting pupils and teachers were more likely to get infected elsewhere.

A difficulty with the study was that it relied on officially found infections. Children, particularly young children, are known to only rarely get symptoms of Covid-19, meaning the virus may have been spreading among them unnoticed.

Dr Tildesley said in a briefing today: ‘We need to approach the data with an element of caution – this will be an underestimate of the true number of cases within schools.

UNIONS POUR COLD WATER ON PLANS TO REOPEN ON MARCH 8

Teaching unions cast doubt yesterday on ambitious plans to get all pupils back into school on March 8.

Downing Street hopes that all primary and secondary children in England can return to classrooms three weeks today as long as Covid rates continue to decline.

But unions were sceptical and asked why ministers have abandoned the idea of a ‘phased’ return of year groups which was used last year.

Geoff Barton, leader of the Association of School and College Leaders, said: ‘There is no point in bringing all children back at once if this causes a spike in coronavirus infection rates which forces another lockdown. It is vital all options are kept open.’

Dr Patrick Roach, general secretary of the NASUWT union, said the Government must show decisions ‘are led by the scientific evidence and advice’.

He also called for ‘evidence of sustained’ cuts to the R rate, nationally, regionally and locally.

Mr Chalke also told The Sunday Times: ‘We should be driven by scientific data, not dates.’

‘There will be some children with very mild symptoms or no symptoms at all.’

Because the data could not prove that Covid doesn’t spread in schools – it only found there is no strong proof that it does – the SAGE scientists said it shouldn’t change the way schools reopen.

Dr Tildesley added the country should be ‘stepping slowly out of this and monitoring it and allowing vaccination to keep pace’.

He said: ‘Given there’s an uncertainty as to what will happen if we open all schools, and whether [the R rate] will go above one, there is certainly an argument for staggering this.

‘So, potentially, thinking about early years or primary schools and then easing back in might be something for the Government to consider.’

The study looked at absence rates among children and teachers and compared them with the communities around them to work out whether outbreaks appeared to come earlier, and independent of, larger surges in cases.

There were 1,320,113 report of absences to the Department of Education between September 1 and December 17, they found.

But they could not be disentangled from community outbreaks.

‘From this analysis we conclude that there is not sufficient evidence to suggest that outbreaks in schools are driving an increase in community cases, with the calculated correlations providing weak evidence suggesting the opposite may be true, that an increase in incidence in the community leads to more cases in schools.

‘As schools re-open, careful monitoring may be required in order to determine 260 the risk associated with open schools upon community incidence.’

The Government’s strategy for reopening schools has become a hot topic of speculation in recent weeks as teachers wait to hear how it will happen.

Boris Johnson is expected to outline possibilities in a press conference this evening or by next Monday, February 22, at the latest. Officials promised to give teachers and parents two weeks’ notice before schools reopened. 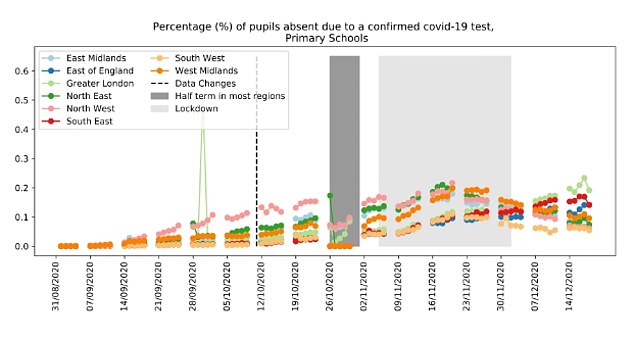 The data showed that the numbers of pupils who were testing positive for coronavirus declined in November’s lockdown (light grey shaded period) in November even though schools were open at the time, suggesting the outbreaks inside schools mirror the community and not vice versa 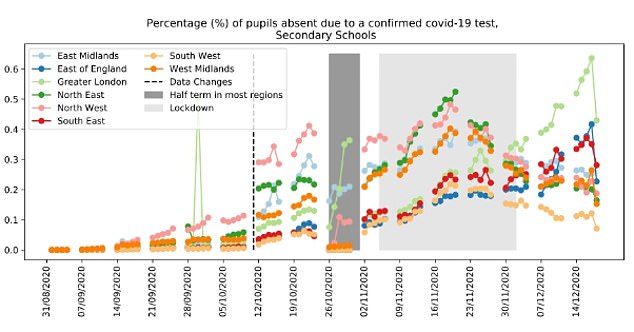 The same was true of secondary school pupils, who had higher rates of Covid-related absence 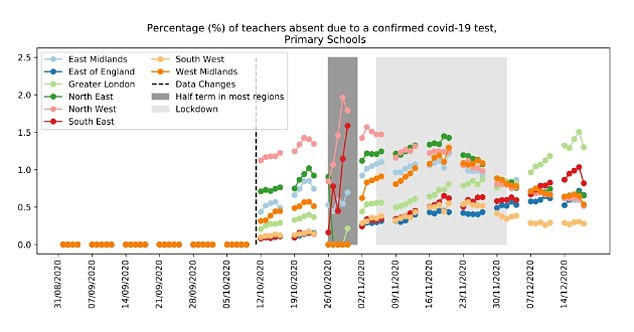 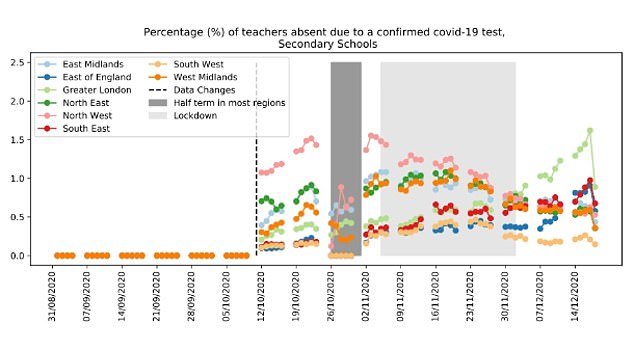 Steve Chalke, the head of the Oasis Academies Trust, has described Number 10’s plan to get classes back up and running on March 8 as ‘impossible’.

He suggested ministers take a ‘regional approach’ by vaccinating all staff before sending pupils back.

He also warned schools needed to create more space including having marquees in playgrounds, to avoid children being ‘like sardines in a can’.

Mr Chalke is the founder of the Oasis Trust, which runs 53 schools around the country.

He warned against the chaotic scenes last September, when all children were sent back after the summer break, ‘like sardines into a can.’

He told BBC Radio 4 Today’s programme: ‘We’re optimistic because the vaccine seems to be working, we all want to get children back…because we know all children will learn better with their peers in a classroom than at home online or whatever.

‘But optimism can be born of two things – dreams and hopes or planning and preparation.

‘What we don’t need is a false start. It’s one thing to open schools – it’s another thing to keep them open.

‘Dates are pulled out of thin air – March 8, after half-term, January 4, it could be Easter, it could be May.’

In a blog last week, the Department for Education appeared to be trying to dampen expectations, saying: ‘We hope to be able to start welcoming back more pupils from 8 March at the earliest.

‘It is important to reiterate that we do not see this as a ‘return to school’ but more of an expansion of the numbers of pupils already in school.’ 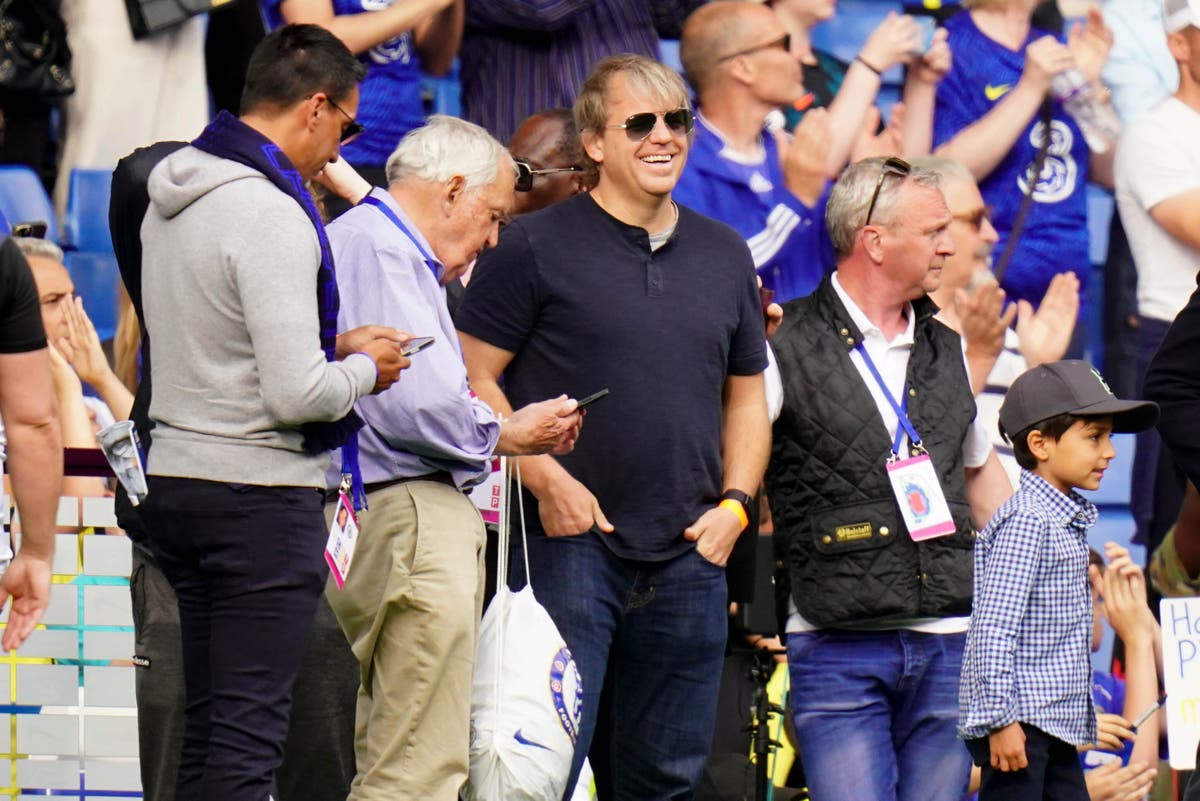